Read Latest Trends on Our Blog 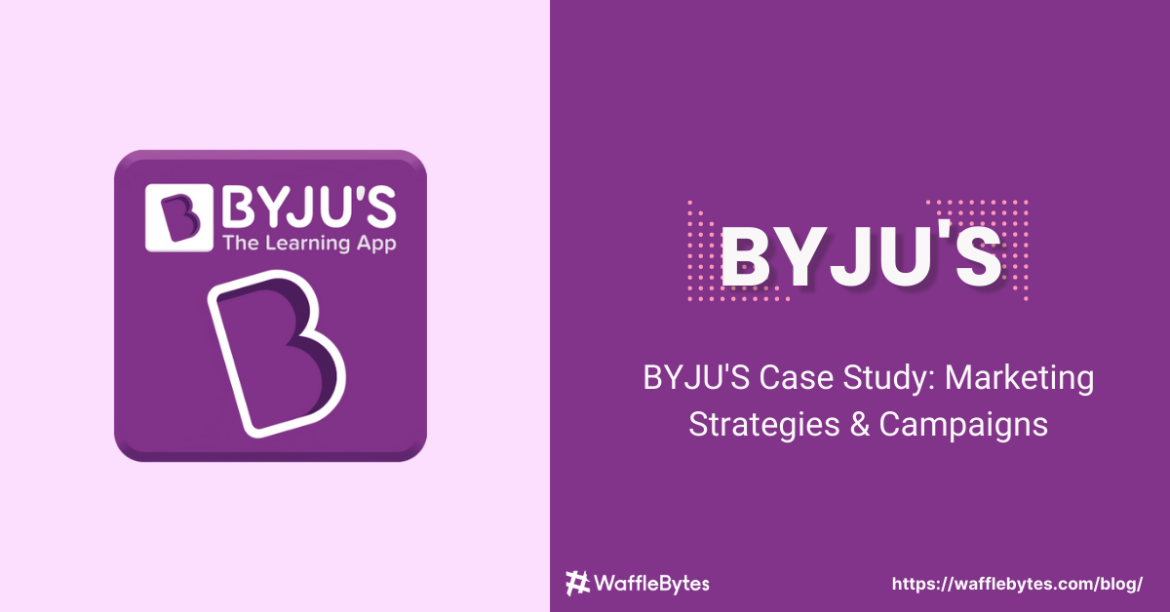 India has relied on an ancient education mode for a long time. Today India is progressing in every sector and incorporating technology everywhere. Especially after corona pandemic, we all have learnt the importance of online modes of communication and education.

Ed-tech or education technology is the industry that incorporates hardware and software technology in education for a better experience for students and teachers both. India has several ed-tech organisations in action. But when we talk about the leading one– it’s BYJU’s.

Byju’s is an Indian multinational educational technology company. It is the creator of India’s most popular K-12 learning app. It offers highly engaging and adaptive learning programs.

It is headquartered in Bangalore, Karnataka, India. Byju Raveendran and Divya Gokulnath founded it in 2011.

As of March 2022, Byju is valued at US$22 billion and has over 115 million registered students.

Byjus was started with a mission of helping children fall in love with learning. With the help of artificial intelligence, they aim to personalise the learning and assessment of every student and provide them with an in-depth analysis of their performances.

They started in 2006 with CAT preparation classes with less than 40 students. In just seven weeks, this number grew to 1000 students. They used to organise free and paid workshops for professionals. By the end of 2006, they expanded to four cities.

In 2007, they did workshops in college and targeted college students. Then they expanded their video content in 2009.

In 2012, they started product testing and interaction. Byjus created content with a specialised panel and launched the first-ever learning programme on tablets for students 8-12.

By 2015, BYJU’s launched their mobile application. Within a year, they achieved more than 300000 active subscribers.

Currently, the app has 10 Cr+ downloads on the Play Store, and students spend 71 minutes each day in more than 1700 cities on average. BYJU’s app has around 6 million paid users, with a renewal rate of 85%. These numbers are a result of the spectacular marketing strategy of BYJUs.

Who are the target customers of BYJUs

The target audience of the edtech business is Generation Z and millennials, from the class of 1 to students taking competitive exams such as CAT, IAS, JEE, NEET, GMAT, UPSC and bank tests.

However, apart from the students, parents are also the primary target for the company as they make the final decisions and are the ones who pay to attend the classes.

Marketing Strategy of BYJUs during the pandemic

During Covid-19, most companies were facing a financial crisis. On the other hand, BYJU took a big leap during this pandemic only. There was a significant increase in both the user base and revenue of BYJUs’.

The Indian Edtech firm became decacorns and surpassed the $10.5 billion valuation in the epidemic after receiving an investment of $100 million through Silicon Valley investor and analyst Mary Meeker’s Bond Capital.

During the pandemic, BYJUs provided free access to all students to their apps for two months. Everyone loves free stuff.

Freebies are quite popular. Our behavioural patterns shift, and the entry barrier is removed when we hear FREE.

This tactic is also related to the reciprocity principle. This idea holds that when someone helps us, we are bound to do the same for them. As a result, there is a substantially larger possibility that students who use the app for two months will enjoy the learning experience and renew their membership.

Due to the great success of this strategy, the business added 6 million new students in March and 7.5 million users in April.

The edtech company reported that this free approach led to a 150 per cent increase in student registration.

BYJUs wants to create its ecosystem. They believe if they want to stay in the company for a long time, they either defeat their competitor or acquire them.

They acquired Whitehatjr, an online coding school, in August 2020 for $300 million.

In April 2021, BYJUs acquired Aakash Educational Services Ltd for $1 billion. This is the biggest acquisition of BYJUs to date.

Subsequently, they acquired more big companies like Toppr and Gradeup, which were online learning applications.

Brand ambassadors are crucial for any business because they offer the brand a more human touch and help to establish authority and trust with the public.

To promote the release of their official app, Byju’s teamed up with Shahrukh Khan for a television commercial in 2017. Because it draws the most viewers, this advertising was broadcast during the India-Pakistan cricket match.

The King of Bollywood thus said, “Let your children fall in love with learning,” while millions of people watched the game. Shahrukh Khan has a sizable fan base, leading many parents and students to become interested in Byju’s app. The intriguing aspect of this advertisement was that it spoke to both parents and children. This campaign had a great deal of success.

Byju has partnered with Disney as well to improve interactions with younger kids. Disney is extremely well-liked among children, which provided the company with an additional boost.

Parents learned that their children might learn through enjoyable activities and stories thanks to educational apps, digital worksheets, and the iconic Disney stories. This collaboration strengthened the K–12 (kindergarten–class XII) space in Byju.

Due to the pandemic, parents and kids now recognise the value of online education. However, in the past, many parents believed that their children’s use of mobile devices was the largest issue. Parents believed that all their kids did with their smartphones and the internet was play games, speak with pals, and watch pointless videos.

They were unaware of the educational benefits of technology for their kids. Byju’s started a video campaign called “Come Fall in Love With Learning” to dispel this stereotype about parents. This campaign assisted parents in realising that using a phone while studying is acceptable.

Byju’s sponsored the Indian cricket Jersey in 2019. The “Keep Learning” video campaign served as the introduction of the Byju’s emblem that appears on the cricket uniform. In this TV ad, Rishabh Pant, KL Rahul, Shikhar Dhawan, Virat Kohli, and Rohit Sharma entered the field of play while sporting the cricket shirt bearing the Byju emblem.

This demonstrates that Byju’s strongly understands how much Indians adore cricket and that they are utilising this knowledge to expand their company. Consider the good effect it would have had on kids and parents to witness their heroes discussing the value of education while donning a jersey with Byju’s logo.

India is a multicultural country with many different languages. Therefore, any company must target customers in their language while developing its marketing plan.

Byju typically ran early-stage advertising in Hindi. However, Byju’s later realised that to reach individuals in various regions of India, they needed to start local campaigns.

The company hired Mahesh Babu in May 2019 for a video campaign that targeted Telangana and Andhra Pradesh. The new advertising campaign emphasised how kids’ learning habits are changing and how Byju’s app makes studying enjoyable. Additionally, it demonstrated how technology might help students learn more effectively and be a friend to them.

Each of the four commercials lasted 50 seconds. The adverts emphasised how much pupils enjoy online education and urged parents to embrace the new teaching approach.

With only sponsoring the Indian cricket jersey, Byju’s wasn’t content. The International Cricket Council (ICC) appointed Byju’s as its global partner for 2021 to 2023 in February 2021. Byju’s can now collaborate with all ICC events for the next three years, including the 2017 T20 World Cup in India and the women’s World Cup in New Zealand.

Byju’s will receive substantial in-venue, broadcast, and digital rights for all ICC events. Given the popularity of the “Keep Learning” campaign, the business decided to increase its cricket spending.

After incorporating cricket into its marketing plan, Byju’s became the first Indian edtech to sponsor the FIFA World Cup. Byju’s is now utilising football, the most well-known sport in the world.

Byju’s will have the rights to the 2022 FIFA World Cup marks, logo, and assets through this sponsorship and the option to launch promotions.

The main lesson to be learned from Byju’s marketing plan is to concentrate on your target market and brand awareness.

You’ll discover they were speaking to parents and kids directly if you look at their marketing plan from the start. They helped pupils realise that they may change their dull study habits into engaging ones.

The company also recognised that although parents are the ones who will purchase their packages, students are its ultimate users.

Most parents believe that children shouldn’t use their smartphones or the internet for academic purposes.

The business understood that it would only be successful if it dispelled this notion. They started the “Keep Learning” campaign to promote the advantages of online learning.

Acting and cricket are popular pastimes in India. For this reason, they selected Shahrukh Khan as their brand ambassador, sponsored the Indian cricket team, and joined the ICC as a global partner. As a result, Byju’s became well-known and gained consumer trust.

These elements demonstrate that they extensively examined both the Indian market and human psychology. Therefore, the next time you create a marketing strategy for your company, start by understanding your target market’s needs and behavioural patterns.